Skills is one of the ways the players interact with the monsters and other players during PvE or PvP activities.

In Ymirheim every class has its own set of skills. Some skills can be shared, which means certain skills can be used outside their original class. There is a wide verity of skills in the game: offensive, defensive, buffs, debuffs. Skills usually consume resources called mana and rage. To learn and level up skills, the players have to use skill books.

Skills have levels, which means the players can level up the skills. The skills have advanced levels, which usually illustrated as a star in the skill's description. The "star level" is only obtainable through special quests and cannot be obtained through learning the skill books.

Shared Skill System is a system that allows the players to share certain skills from one class to another. Not all skills are sharable. To be able to share the skill, the players need to level up a certain class to a certain level. Shared skills take slots to be shared. Shared skills take different amount of slots. Not only not every skill can be shared, but also the players can't share all the sharable skills at the same time. Which means the players have to make decisions about which classes to level up and which skills to share. 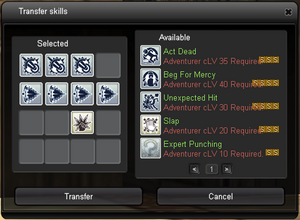 The game has a special feature that allows the players to switch between weapon sets. That feature can be used to switch weapons, which should help to use skills that cannot be used without specific weapons.